Are you looking for the authentic peach melba dessert? Peach Melba must be one of the most popular European desserts. It originates from the French cuisine and has some interesting culinary history. That’s why it drew my attention.
On the first glance it seems that it is a very simple dessert but I detected some differences between the American versions and the authentic recipe. So as I did my research I decided to stay with the authentic version from nobody else than Master Chef Mr. Auguste Escoffier.

It was in 1892 Auguste Escoffier created this dish at the famous Savoy Hotel in London, because he had to come up with a dessert to honor the very popular Australian soprano singer Mrs. Nellie Melba. 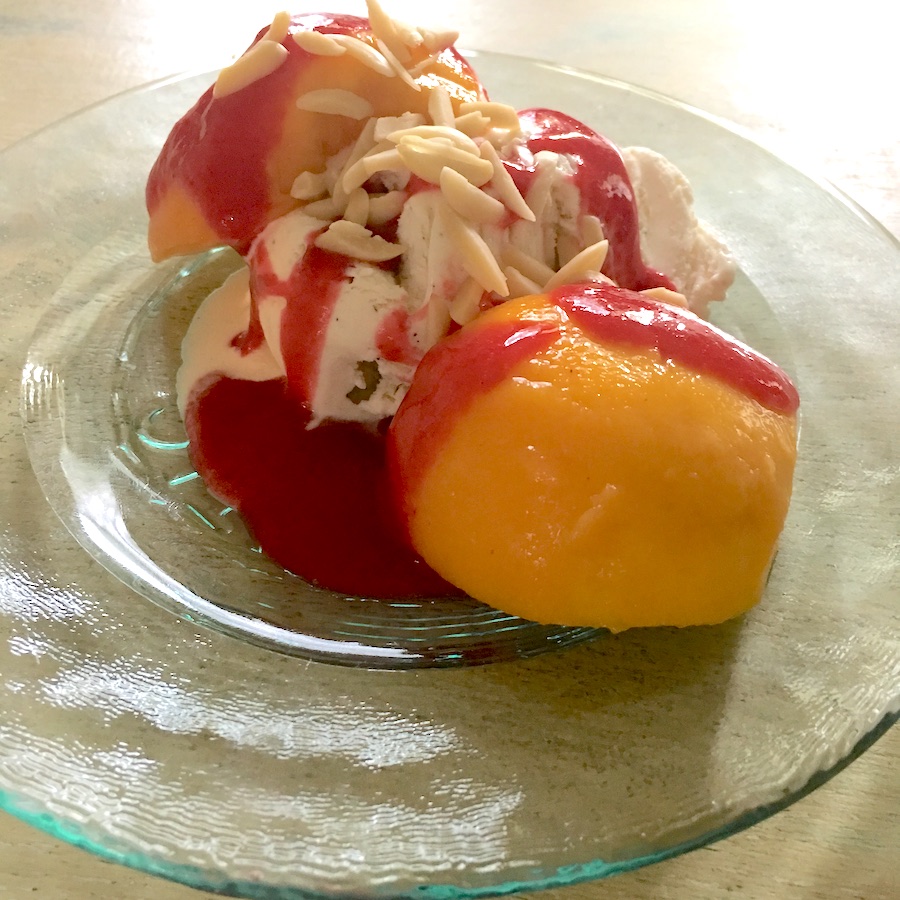 A Look into the History
Nellie Melba was performing in Wagner’s opera “Lohengrin” at London’s Covent Garden, and it was a huge success. To celebrate this success the Duke of Orléans hosted a dinner party, and Escoffier had the task to create a new dessert for this special occasion.
It was indeed a spectacular dish that he served:  An ice sculpture of a swan, which is featured in the opera, that carried peaches which rested on a bed of vanilla ice cream and was topped with spun sugar. So this was the original Peach Melba.

Later on, in 1900, Escoffier brought the dessert to a new and its final level. When the prestigious Carlton Hotel was opening, where he was the head chef, Escoffier took the old dessert but omitted the ice swan and topped the peaches with a raspberry sauce.

There are other versions of this recipe that use pears, apricots, or strawberries instead of peaches. Instead of the raspberry sauce some added melted redcurrant jelly. All these versions are not authentic. So I like to stick to the original recipe that puts certain stress on “tender and very ripe peaches, vanilla ice cream, and a purée of sugared raspberry”.

Ending here the history with master cook Escoffier’s words:  “Any variation on this recipe ruins the delicate balance of its taste.” I agree completely. You will find out when you have tasted it yourselves. For me, it is the best dessert I have had!  Happy Cooking!

Prepare Fresh Peaches
– Bring water to a boil.
– Set aside a large bowl of ice water that is placed close by.
– Gently place a peach at one time into the boiling water.
– Let peaches simmer for 15-20 seconds, so very short! Make sure that all peaches are completely covered with water.
– With a slotted spoon remove peach from water, and immediately place into the ice water for a few seconds.
– Remove peach from the ice water, and place on a plate. Do this with each peach.
– Now peel peaches. Their skin should come off easily now, if not the peaches were not 100 percent ripe.
– Cut peaches in half and discard the pits.

If you use canned peaches make sure to use peaches that are not over sugared. Drain the peaches and let dry on kitchen paper.

TIP
Peaches can become brown when peeled. To prevent browning place peach halves in a large bowl of cold water mixed with 1 tbsp fresh lemon juice.
Let the peach halves sit in the water for  10 minutes. Remove them from the water with a slotted spoon, and with a paper towel gently pat the peach halves dry.
– Sprinkle  sugar on all the peach halves.
– Place them on a plate in a single layer, and keep them in the fridge for 1 hour to chill.

Make the Raspberry Sauce
– Place the raspberries into a blender or use a stick mixer to create a purée.
– To get rid of the seeds strain the purée into a bowl through a fine-mesh sieve, pressing down on the solid ingredients and agitating the mixture with a metal spoon to extract as much syrupy juice as possible. It will take a few minutes to extract all of the juice from the solids. When finished, you should only have seeds and a bit of pulp left in the strainer.

Final Step
– Get six serving dishes ready (plates work, but cocktail glasses would be fine as well).
– Scoop ½ cup of vanilla ice cream into each serving dish.
– Place two of the sugared peach halves on top.
– Divide the raspberry sauce between the six dishes, drizzling the sauce over the top of the peaches and ice cream.
– Sprinkle on each serving some of the raw almond slivers. This is optional but it adds a nice subtle almond flavor to the dessert.

Last but not least – Serve immediately.