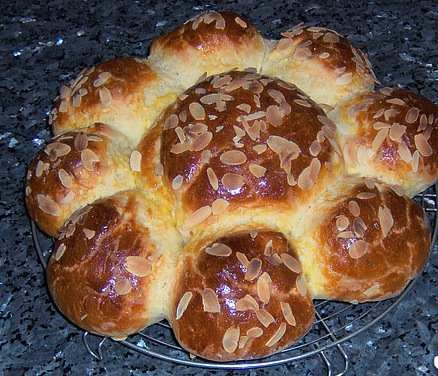 The Dreikönigskuchen, in englisch King Cake oder King’s Cake, in French Galette des Rois, in Spanish Roscón de Reyes, is a traditional cake to celebrate January 6th which is the Dreikoenigstag – the day of the three holy kings. This cake is not especially something typical German but it had been brought to Germany via France and Switzerland. One piece of the cake contains a bean or an almond and who finds the piece will be the king of the day.In the year of 1561 the German writer Johannes Böhm wrote about this cake the first time („Mores leges et ritus omnium gentium“) and mentioned to place the bean or the coin in the King’s cake.

Martin Lienharts dictionary from the Alsace mentions in 1572 „noch werden die bonen im königküchen auff die heyligen dreykönigtag gefunden“. It means that the bean will be found in the king’s cake that is made for the holy three kings day.
The tradition was known before the reformation. In an abbey of the city Düsseldorf the bean was substituted by a penny. (1607). Happy Baking.

– Break yeast apart and mix it with milk, when using dry yeast mix it with the flour.
– In a big bowl mix salt and sugar with flour; melt butter then add milk.
– Add the  milk-butter mix to the flour into the bowl; beat egg and add it too.
– Knead the dough thoroughly until it is very smooth, then add raisins and knead again.
– Cover it and let tit raise at a warm place until its volume has doubled.
– Make quarters out of the dough and from a ball out of each quarter (for the middle part). Cut the other 3 quarters in half and form balls, you will have 6 balls that are placed around the middle part.
– Place in one ball the almond or the chocolate piece (surprise).
– Press the smaller balls around the bigger ball by brushing some water onto the places where you will stick the smaller balls, so they will stick.
– Flatten the cake gently a bit and with a brush spread egg yolk-heavy cream mix on top of it.
– Pre-heat oven to 200 C or 375 F
– Let the cake raise for another 20 minutes. Then bake for 40 minutes and let cool off.

You can decorate the cake with coarse sugar or almonds.The person who finds the almond that is hidden in the cake will be the king of the day!