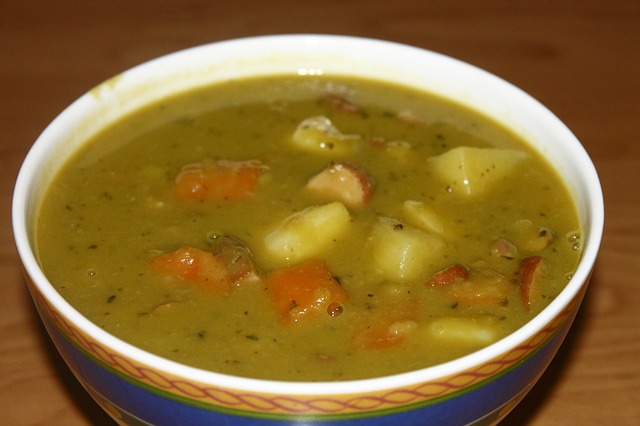 The German Split Pea Soup, or as we call it in German “Erbseneintopf or Erbsensuppe”, is another great soup you will like.  The split pea soup is a typical German soup that is very popular during the fall and winter months.
Split pea soup can be made with or without meat – it is up to you. You can add bacon, Kassler, or sausages. It also tastes awesome with chicken broth instead of water, or with some spices like hot red pepper (chili), or green and red pepper. The German Split Pea soup used to be the food for the men at sea, and they almost ate it daily, back in the times when the ships were not equipped with cooling systems. Dried peas were easy to store and the soup was easy to make like with our authentic recipe from Germany. Happy Cooking!

Popular German Meat Sticks – Landjäger Availabe Now at Lovegermanfood.com
Made in USA – Tastes Like from Germany 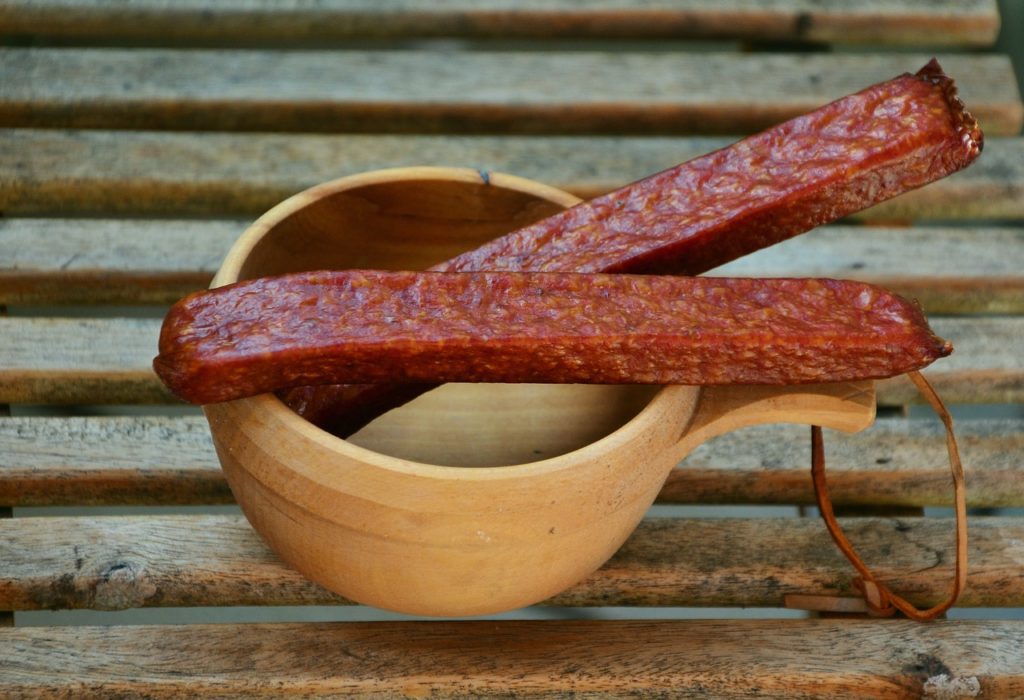 – Wash peas in a sieve. You can soak the peas the night before in water. It will shorten the cooking time a lot. After soaking drain them, and add  to the soup as described in instruction.
– Cut bacon into small cubes.
– Peel onion and chop it into small cubes.
– Cut leek and carrots in small pieces.
– Peel potatoes and cut them in small cubes.
– In a large pot heat butter or oil, fry onion and bacon until transparent.
– Add peas, carrots and leek fill up with water or broth until peas are covered.
– Add bay leaves, salt and pepper (don’t forget the meat will also add salt to the water).
– Bring it to a boil (if the water gets foamy remove the foam with a spoon).
– If you use Kassler: After 30 minutes add the Kassler and the potatoes.
– Let it cook for about 1 more hour then take out the Kassler and remove it from the bones, cut the meat into small pieces.
– Add the sausages (you can cut the sausages into smaller pieces if you like).
– Let it cook for another 15-20 minutes, then add the meat again before you serve it.

Tips
If you soak the peas over night in water you would use the soaking water as cooking liquid. The cooking time might vary then too; in general pea soup needs a long cooking time until the peas are really soft and mushy.
You can use  a stick mixer and puree the soup.