The German pumpkin lasagne is  a great recipe using pumpkins and the fall season. It is a combination of pumpkin, egg plant and leek, and it is also a  healthy, veggie dish.  If you like pumpkin dishes, this recipe is for you! Happy Cooking. 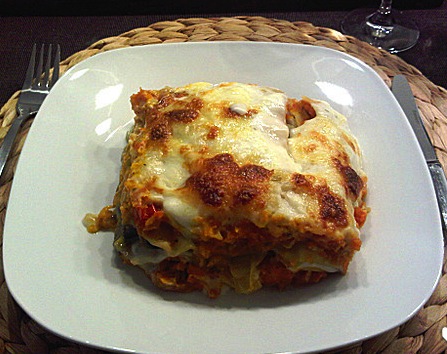 – Cut pumpkin and aubergine in small pieces. Slice leek, chop onion and garlic fine.
– Cook the pumpkin pieces in some water for 2 minutes or until they are medium soft. They should not be too soft and can be somewhat raw in the middle. But the cooking time depends on the kind of pumpkin as well.
– Heat oil in two skillets: in 1 skillet add half of the onions and garlic. Add the pre-cooked pumpkin pieces and brown them for 2-3 minute. Then add chopped tomatoes and tomatoes from the can.
– Add basil, salt, pepper, sugar, instant broth and heavy cream.
– Let cook on low heat until liquid is almost gone. Set skillet aside.
– In 2nd skillet add remaining onions and garlic, add leek and saute it until you have some liquid, then add aubergine. Saute on low heat until the vegetable is soft; spice with salt and pepper.

– Sauce: Melt butter and add flour, whisk continuously so you won’t get any clumps.
– De-glaze with milk, stir continuously until the liquid gets thick.
– Add salt, pepper and nutmeg to taste.

Prepare lasagne sheets per instructions. Some are pre-cooked some not.

Bake in preheated oven on 200 degrees C or 390 F for 45 minutes until the cheese is golden brown.