The Franzbrötchen cinnamon rolls from Hamburg is a traditional pastry of the German city Hamburg. Back in 1806 to 1814 the French occupied Hamburg and during that time a so called “Franzbrot” was made which is known as baguette today. During that time a baker from Hamburg accidentally  made the rolls by searing such a Franzbrot in a pan of fat. But this is a legend… This is a proven German recipe and easy to make. You can watch the video, although it is in German you can follow the steps. Happy Baking! 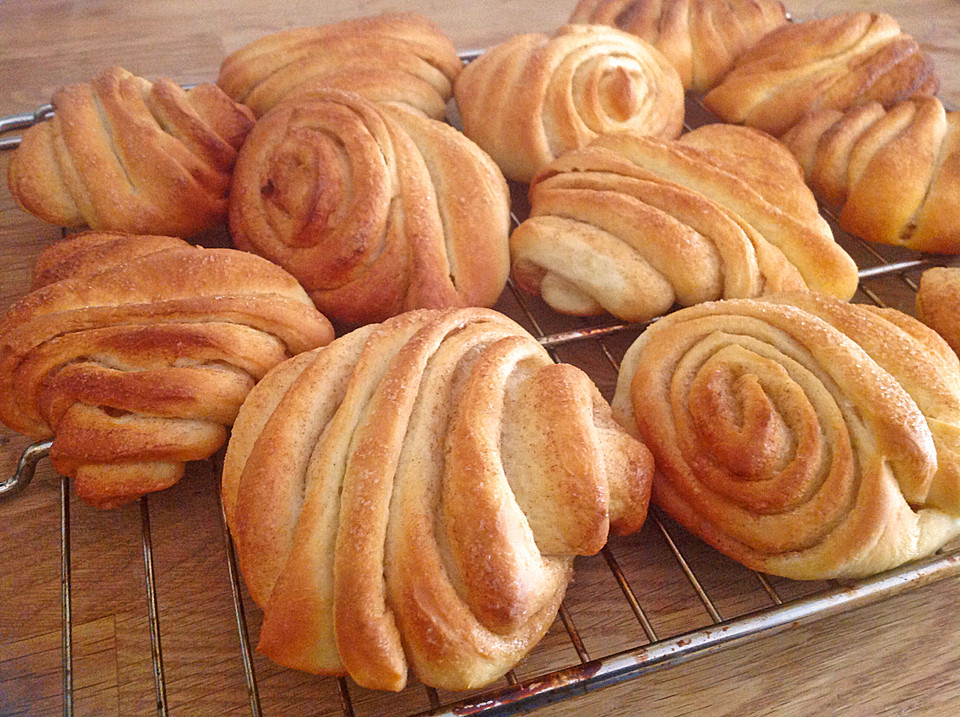 Filling
120 g very soft butter (should be creamy, not liquid)
50 g sugar
1 tbsp cinnamon
for the topping: some sugar, cinnamon, butter flakes, some flour for the baking board

– Warm the milk and dissolve the yeast.
– The milk should be lukewarm and not hot.
– On a baking board place the flour; in the middle form mold and add the egg and milk.
– With a very small spoon mix little by little egg and milk with the flour.
– You should get a dough that can be kneaded. Knead dough, add the butter and the salt. Continue kneading. Should the dough be too moist add some more flour.
– Place the dough into a bowl, cover with a kitchen cloth.
– Let raise at a warm place for 45 min.
– Knead the dough again and let rest for another 20 min.

– Sprinkle some flour on a baking board or smooth surface, then roll the dough into a big rectangle.
– Mix the very soft butter with sugar and cinnamon and spread the cream over the dough.
– Roll the dough starting with the longer side. If the dough should not be elastic enough let it rest for another 5-15 min, then continue rolling.
– Pre-heat oven to 350 F.

– Cut the roll in 2 inches thick pieces and place them on a layer of parchment paper.
– Take a cooking spoon (or a fork) and press the long handle into the middle (vertical) on each piece (see video)
– Cover with a kitchen cloth, and let raise for 20 min.
– Sprinkle some butter flakes and the sugar-cinnamon mix on top.
– Bake for about 20 min.

VIDEO: How to make Franzbroetchen (in German only)
In the video she is not mixing the butter with sugar and cinnamon, she adds it one after the other which is a possibility. Just make sure that the butter is not liquid.