Learn how to make the German snack – Potato Hotdog, a recipe from the German region Thuringia – Thüringen. As you can see on the photo every potato contains one Thüringer Rostbratwurst which is a spicy sausage from Thuringia. The sausage is 15–20 cm long and thin in shape, traditionally grilled over a charcoal fire and enjoyed with mustard and a roll or bread. The name Thüringer Rostbratwurst is also recognized as a PGI under EU law.

Triggered by the discovery in 2000 of an account entry of 1404 first mentioning the Bratwurst in Thuringia in the town of Arnstadt, the association “Friends of the Thuringian Bratwurst” was founded in 2006. In the same year, the association established the Erste Deutsches Bratwurstmuseum (First German Bratwurst Museum) in the village of Holzhausen. A two-meter-high wooden monument of a Bratwurst in a bun on a local traffic roundabout advertises the museum.

When I found this recipe I thought that this is a great recipe if you like sausages and potatoes. This recipe is using the small Thuringian sausages of about 5 inches length. It is great for children, parties and dinners. Easy to make. I find them mostly at Trader Joe’s. Happy Cooking! 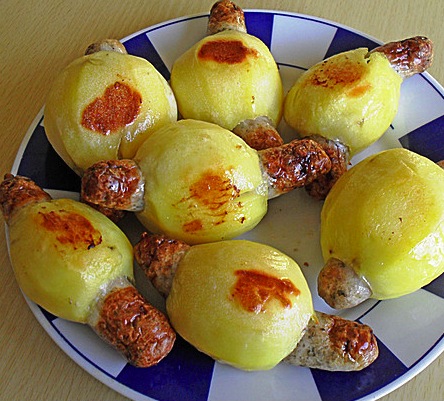 – Peel potatoes, wash them and with an apple corer make a whole in the middle of each potato.
– Fill each potato with a sausage.
– Grease a fire proof form with butter and place the potatoes in it; choose a higher form with a lid as the sauce will come to a boil in the oven.
– Wash vegetable and cut it into small pieces.
– Make the sauce with heavy cream, milk, water and spices and when it is done pour it over the potatoes (follow instructions).
– Add the vegetable to the sauce.
– All potatoes should be covered with the sauce.
– Pre-heat oven to 180 C or 350 F and bake the potatoes for about 45 minutes.
– Remove lid, sprinkle the cheese on top and bake it for another 15 minutes until cheese is melted and shows a nice crust.

Serve it with lettuce.