Russian Bread Cookies or “Russisch Brot”  in German oder Patience is a cookie made out of a dough with cocoa and egg whites without any butter or egg yolks. Traditionally it is baked in form of letters.

Supposedly thew Russian bred cookie came from Saint Petersburg where the German baker Ferdinand Friedrich Wilhlem Hanke found out about it, and he brought the recipe back to Dresden. There he opened the first bakery, a German & Russian Bakery” where he sold the Russisch Brot.

In Austria they call the cookie Patience because it consists of Latin letter and not the Russian Cyrillic alphabet, therefor they assume that is did not come from Russia!

Wherever it started it has become  a classic cookie amongst the commercial baking industry. Already in 1858 the Austrian company Victor Schmidt & Soehne (nowadays Manner)  baked these cookies; end of the 19th century Russisch Brot was made in Dresden and since 1906 it is produced by Bahlsen. They say that the Russian Bread cookies etymology comes from the word  „Rösches Brod“ (rösch = knusprig = crunchy in English), Brod = sweet cookie). Therefor Russian Bread is not really what it means. It is easy to make and children can learn the alphabet by eating the letters. Happy Baking! 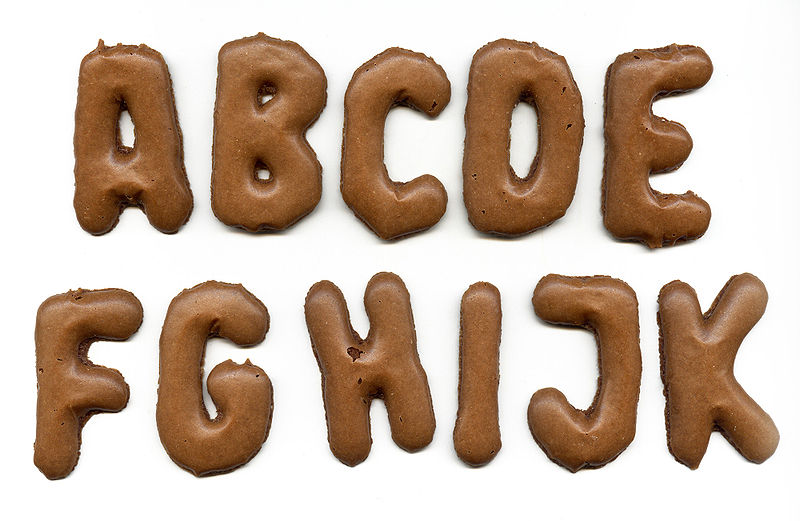 Beat egg-whites and salt until you get very firm Meringues.
Slowly add Sugar and Vanilla sugar, than add Cocoa.
Last fold in flour. Make sure its well mixed .
Lay parchment-paper on a cookie sheet. Meanwhile let dough rest in refrigerator for at least 15 minutes. Pre heat oven to 350 F.
Place dough in piping bag with regular tip and make letters or any other shapes.
Keep a good 1 inch apart from each.
Bake 10 minutes. Bring out and let rest for a few minutes then return to oven for another 5 minutes.
(Like Biscotti almost twice baked)
Let cool off completely before you store them in an airtight container.